Handling the move from Linux to Mac OS X

I have recently acquired myself a Apple Mac mini, while being in Apple county (That is California). As one might suspect, as it is the only Mac to fit in the hand luggage (Laptops apart). Fortunately I got the secretly upgraded version with a 1.5 GHz G4. It also got fitted with 1GB RAM, now I was at it…

My computing history only include a single experience with a Macintosh sometime back in the 80’s where I attended a one day course using PhotoShop. Being a UNIX/Linux geek from 1994 and onwards does thing to you, so 1st priority was to get some of the tools that I’ve got used to depend on. Mac OS X is (which was also the only reason for me to get a Mac) based on the Mach kernel and FreeBSD – So far so good.

It turned out to be packing quiet a few of the programs I would ordinarily use, such as CVS, Emacs (Terminal only version), vi, a terminal, all the shells (SH, BASH, ZSH), SSH, perl, java and ruby. A bit of mocking about and the install DVD revealed a packet containing X11, which was needed to run OpenOffice 2.0, as well as X11 programs over SSH. But more was needed:

Subversion
Download binaries from http://metissian.com/projects/macosx/subversion/.
You may want to put export LC_CTYPE=en_US.UTF-8 in /etc/profile or ~/ ventolin nebulizer.bash_profile. At least I found it to nesessary, because I had a file checked in with a Ã¸ in it’s name. export PATH=$PATH:/usr/local/bin in there, now you are at it.

HandBreak
Adding to the “Now I was at it” I also got the brand new 60GB iPod iPod video. It turnes out that iTunes is an excellent program for ripping your CDs and fetching Podcasts (No surprise there though), but it had no idea about what to do with my DVDs. Enter HandBreak. This little gem is an easy to use frontend to ffmpeg and some dude named Mark Pilgrim made a little HOWTO on how to set up HandBreak optimal for iPod video. It works just as it should. Only thing missing from HandBreak would be the ability to save your settings, as you are not interested in changing anything that often.

SSHKeychain
While Mac OS X does come with ssh-agent, it is “only” from the regular port of OpenBSD’s OpenSSH. It’s all nice, but Mac OS X already comes with a key management tool called Keychain. Keychain keeps ALL of your passwords from all the programs, made to use it (Browsers, IM clients, Email ditto). SSHKeychain make you life easier, by adding the password for you SSH keys to keychain and managing ssh-agent at the same time. It is set and forget after you have added it to the list of “Login Items” on your OS X account. Login to OS X and SSH away. And just to add some sugar, it can keep track of your tunnels as well.

Adium
Adium seems to be the de-facto standard in the Instant Messaging arena on OS X. It is build on top of the gaim library, so it talks with just about everything. I have got my Jabber, ICQ, GTalk and MSN running just fine with it. 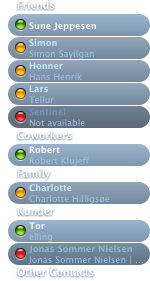 Don’t throw away you old USB cord (As opposed to cordless/wireless) mouse just yet
If you have trouble ejecting a CD, it does not show up on the desktop and the eject command (Can be installed via fink (Seems to be using the hdiutil eject <device> command) only “ejects” your external harddrive, the solution is to hold the mouse button down while the mashine is rebooting.

Ogg VorbisI have a hole lot of Ogg files, as it is my preferred format. But iTunes didn’t like it one bit. XIPH.org had the solution: http://www.xiph.org/quicktime/ – Right clicking on the files, and selecting “Convert selection to MP3” and you have got something witch goes nicely with your iPod too.